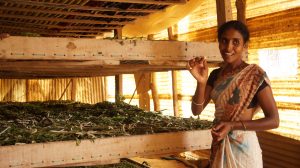 We do this is by Communities we work with

People born in the world’s poorest places and difficult circumstances deserve the chance to achieve their full potential, because every human life is valuable.

Vrutti has focused on working with farming communities as agriculture is the primary source of livelihood for over 50% of Indians, and over 70% of farmers are smallholder producers. We revved up our direct engagement with farming communities from 2010-2011 when we piloted, and subsequently developed a proof of concept for the “Agriculture Enterprise Facilitation Centre” (AEFC). Scaling up from two districts in Madhya Pradesh and 2,000 farmers, to 9 districts across six states ( Andhra Pradesh, Chattisgarh ,Madhya Pradesh, Karnataka,Tamil Nadu, Telangana, ) and over 42,500 farmers, the model is constantly evolving and growing, with its latest avatar being the 3 Fold Model – which involves intensive engagement with farmers and their institutions. We also are working in Maharashtra and Madhya Pradesh on Integrated Village Development Models. We focus on regions that are largely rainfed, in districts identified by the government for special assistance under the Backward Regions Grant Fund, and communities that are socially and economically marginalised such as scheduled castes and scheduled tribes, and small and marginal farmers.

FishMARC has a history of its own. Its origin can be traced to the South Indian Federation of Fishermen Societies (SIFFS), a Trivandrum based cooperative organisation of small scale fishermen in Tamil Nadu and Kerala. Started in 2008, fishMARC has been working in Kutch, where it organised a Fishermen Producer Company. It has also been working in Tamil Nadu with the State Government to promote better management of fish resources and has promoted three co-management pilot projects. In August 2017, fishMARC has been operating as part of Vrutti, in order to access the benefits of a larger pool of professionals and improve its resource mobilisation. The Secretary and founder of fishMARC is heading this new vertical in Vrutti. Though a part and parcel of Vrutti, the fishMARC label is being retained by the vertical in recognition of its history and brand value

Vrutti works with communities in difficult circumstances, women in sex work, communities living with or vulnerable to HIV. Our work with these communities started around 2005. These communities are disempowered and unable to take decisions on their lives and livelihoods. A critical component that triggers and sustains this situation relates to finance. Vrutti steps in to provide support related to financial literacy, financial inclusion, livelihoods support, which provides them a sense of security and of pride, empowering them to take decisions for their and their family’s well-being. In the past year, Vrutti has been working closely with women in sex work, transgender communities and their institutions.